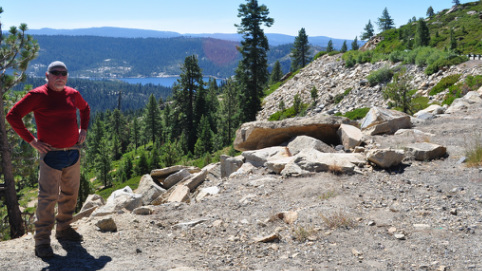 About Me:
First a little bit about me. I am 63 years old.  . Married to Nancy Stubbe and have 2 boys Brett and Arron from a previous marriage and Jeff , Jennifer and Jessica that came with Nancy.. Jennifer passed away in 2009 after battling Cystic Fibrosis for 22 years (see the dedication tab).  I retired from AT&T 12/31/2011 after 43 years of service. 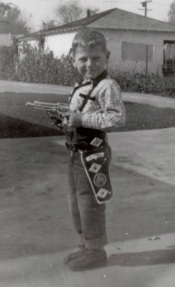 Born in Alhambra, Dec 2, 1948 I grew up in a pretty middle class
family. My Father an accountant and later executive with Union Oil. My Mother
stayed home to take care of us (my sister Rosemary and I). She also did what
they called "Grey Lady" Volunteer work with the Red Cross. I was a huge Cowboy fan
even in my young days and spent hours fighting Indians and bad guys through my
entire youth. Probably why I got interested in Living History Re-enacting later in life.
We moved from Alhambra/San Gabriel in 1953 to the Sticks (West
Covina, Ca) where I attended every elementary school in the district as they
were built.  I went to Covina High School and graduated in 1967, a completely
unremarkable student, but a social gadfly, I was voted most spirited by my
graduating class. After graduation, and having no intention to go to College, I got
a job working at the local Drive In Theater. Three months of walking around and
saying "Heads above the seat, Please" and I was ready to move on.
In Aug of 1967, with the urging on my mother, I applied for a job at Pacific Telephone &
Telegraph, and was hired into an entry level position delivering company mail delivering company mail. 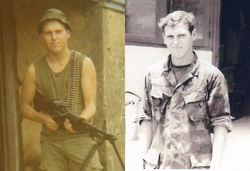 January 1969 the unpleasant news arrived that I had been
"DRAFTED" and by March of 1969 I was on a bus to Ft. Ord, California for my
Basic and Advanced Infantry training. In August of 1969 I had arrived in
the Repubilc of Viet-Nam and was assigned to the C company, 1/327th 101st Airborne Division.
Man, was that a wake up call. From a pretty routine life of a decent Job and
relaxation,  to combat infantryman  in a war zone. I left Viet Nam in Aug 1970 having
finished my tour as a Sniper Team Leader in E Co. 1/327th 101st Airborne .  Afer Viet Nam I was  stationed in Colorado Springs for my remaining time, I exited the Army in 1971 after 2 years active duty. Because I was in a combat zone I was classified "non-active reserve". I returned to Pacific Telephone & Telegraph and was made a Lineman (which is what I originally applied for and was told I didn't have a high enough electrical backround, Go Figure).

Little Known Fact - In 1971, a friend of mine invited me to go with him to a audition of "The Dating Game" and after 3 interviews was on the TV show and  WON.. :) 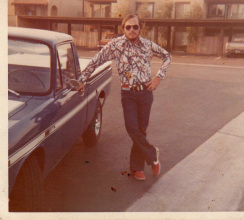 In 1970 I took a leave of absence from PT&T to go back to
school getting my AA by 1972 and while I was at it got married. I returned to
PT&T as a lineman in Newhall, California and spent a year there before
transferring back to Glendale which was closer to home and family. During those years I was
Lineman, Splicer, Maint Splicer before moving to a office job as a Line Assigner
in Alhambra.
In the early 80's I got interested in computers, and purchased
my first a Commodore 64 with a tape drive and a 110 baud modem. I was HOOKED. I
found that I had some talent with computers and in 1987 I got promoted to IT
where I have spent the rest of my time and except for the Pacific Telephone to
PacTel To PacBell to SBC to at&t mergers, where I am ending my career. I've
been fortunate in my career to have had many different assignments and I can honestly say looking back that I enjoyed each one with the challenges and opportunities they offered. I've been very fortunate.

Note:
Little known Fact in 1972 some friends invited my now ex-wife and I to try out
for the NewlyWed Game and after 3 interviews.. WE WON!!!! go figure.

At the ripe old age of 35 the boys came, first Brett Allen (1983) and Arron William (1985). They were the light of my life and have grown up into fine Men that I am proud of.  Brett picking up the computer gene from me, works for an engineering firm and Aaron who picked up my fathers talent for building things works as a forman for Catipiller. Aaron got married in 2010 to a lovely girl Lauren and have their first child Jayde Cali,  May 2011, my first grandchild (life is good). My Daughter Jessica (from Nancys previous marriage) gave us our 2nd grandchild July 2011. So we have bookends for now. 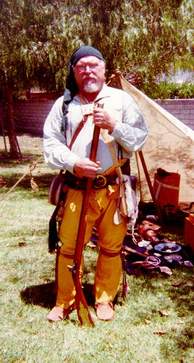 On Presidents Day 1996, I went to a Living History Event at Calico Ghost Town near Barstow California. There I met my friend Ed Aguilar.  After about 5 minutes of conversation I knew it was something I really wanted to do. So I became A Living History Re-enactor. Starting with doing Mountain
Man impressions, and then Civil War and later 1880's Southwest Cowboy.  It was
like I had be reborn. I guess I've always been a ham and this was like Street
Theatre. You could take on a persona with a whole bunch of people and educate and entertain at the same time.  Once while playing a Confederate Soldier, I was asked why I had so many guys on me. I had 4 pistols 3 knives and a shotgun. I answered in my very best Texacan "Hon, I'd hate to git kilt for lack of shootn back" . I have to say hanging around with re-enactors learned more about U.S. History than I even learned in all the schooling I had previously (which was moslty inaccurate).
In 2003, I was fortunate to go to St. Charles Missouri to participate in the
"Bi-centennial of the "Lewis & Clark Voyage of Discovery" (picture to the left). It was an incredible experience. At this point  I built my first webpage which was a labor of love.
You can click on the link below and see some of the impressions I have done.
http://webspace.webring.com/people/qt/t_stubbe/ 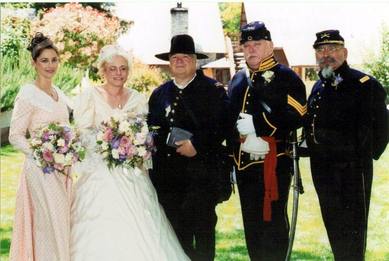 Divorcing in 1991 and having been single for 12 years I  got married for the 2nd time. Of course I was deeply into re-enacting so it was only natural that the wedding be something special. So we did a outdoor wedding  Civil War theme and frankly it was perfect. From Left to right Suzie Fenton (Maid Of Honor, Nancy, Roger our Unit Chaplin, Myself and Ed Aguilar my best man)  We even cut the cake with my sabre which brought cheers and laughter. 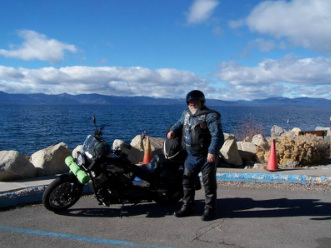 I had several motorcycles before I had the kids, and put that
interest on the back burner for safety reasons. Once the kids were out of the
nest it was time to start riding again. I purchased a 2006 Yamaha Vstar 1100. In
Sept of 2006 I took a week long ride through California, about 2000 miles total.
I learned two things. 1. That taking long trips was exactly what I was looking
for, and 2. I needed a bigger bike to do it. So in 2008 I picked up a 2007 Royal
Star Tour Deluxe which is my current motorcycle. Along that path I met up with
my riding twin Ed Skvor. In 2008 Ed and I headed out for our first big ride.
Yellowstone.  I often say "Ed and I are connected at the brain when riding". Both
of us Vietnam Vets, him a Marine and myself 101st Airborne, with many of the
same experiences. We have become fast friends and take several trips a year. Our
riding styles are similar yet with enough differences to make us both interesting. Most importantly we haven't driven each other crazy yet. 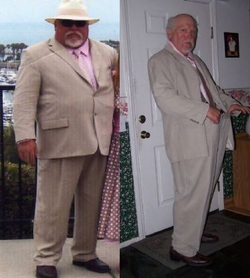 By 2009 I had ate my way into a type 2 diabetic condition. I weighed 295 pounds (left) and was in terrible shape. It was then I found the Low Carb Lifestyle in currently on. After reading a book called "Why we get fat - gary taubes" I decided it I was going to do this right, I'd have to change my eating lifestyle. With most everything I do, I threw myself into it 100%. After 18 monthes I had lost 75 pounds, and, was off the meds I had been taking for the Diabetes. I've been Low Carbing for 2 1/2 years now and enjoy it so much that I created my 2nd webpage "Tim Stubbes Kitchen"
If you click on the link below you can visit that site..
http://mysite.verizon.net/res1p12v/timstubbeskitchen/
If you struggle with weight and your on and off  "Low Calorie" diets. I'd recommend looking into a  a low carb lifestyle.
Once I hit the 40 year career plateau, I started thinking about what I wanted to do once I did retire. A plan started forming in my head. What about an Epic Motorcycle Ride. The seed was planted and it grew into this 4 corner adventure. I purchased a trailer in Marsh of 2011 and proceed to learn everything I needed to learn about motocamping. After pulling this trailer 9700 miles over most of the High Sierra mountain passes and most of the southwest, I'm ready for this adventure to begin. So 12/30/2011 retire and start my 3rd life. 1st life my youth, 2nd life my family career my 3rd life will be my Retirement adventures.

So there you have it, a quick capsule of Tim Stubbe. Now you know a little more about me and where I've come from. Now on to the Adventure of a lifetime..